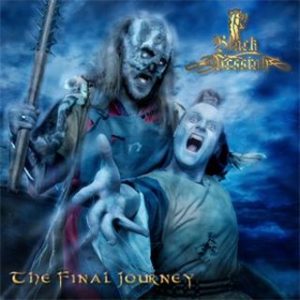 Black Messiah, a German band, which I often listen to. I was really looking forward to this new ‘The final journey’.
‘Windloni’ is the beginning of this CD. The first one and a half minute is the intro. Then ‘Windloni’ really opens up. A good start of this journey for this Germans, with a very own style, you get filled up with their sound, you notice at once, this is Black Messiah. The guitar riffs, de vocals, you pick it up at once! Delicious!
The second track, ‘Der Ring Mit Dem Kreuz’, shows the other side of Black Messiah, we all know too. The violin in the centre of things and the rest build around this. This track is definitely the best of the entire album.
But after this, starting with ‘To become a man’, I get the feeling I’m listening to something I’ve heard for years. It’s simply too much like the other albums they made.
To have a style of your own is a very good thing, and the trademark of Black Messiah is clearly the guitar riffs. But to play for three albums more or less the same riffs? It’s time to take it a step further. The same goes for the vocals, it’s all too predictable. When you’ve heard a few notes, you know already how the song develops. But that’s the only negative thing I can tell about this album. The songs are on the whole a bit stronger than they were on the last ‘First war of the World’. But they are simply too much alike.
Remarkable on this album is the 4 track lasting ‘Naglfar Saga’. A song about the famous ship known from Norse mythology.
All things considered it’s again a recommended album for the German paganmetalfan, like Black Messiah always is. And although I think it’s too much of the same, is surely a strong record. The editors of Folk-metal.nl are divided which aspect is most important.
I’m going for to much of the same, but it’s probably better to decide for yourself, and believe me the album is worth listening to.