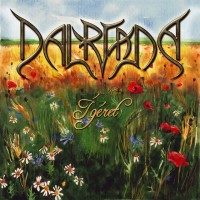 The Hungarian band Dalriada, I believe not many people are familiar with this band. Even if it is told this band is active from the start of 2003, by then using the name ‘Echo of Dalriada’, still a lot of people won’t know the band. After 5 studio-albums, the band comes up with ‘Igeret’. While this album dates from late 2011, we still wanted to provide you with a review from this record! Will this be the album that means a world-wide breakthrough for Dalriada? We shall see!
The band starts with a rather simplistic intro. A man singing, accompanied by violin and percussion. Very calm, but it sets the mood for the rest of the album. The next song couldn’t be more different. With ‘Hadjútánc, the band starts with a bang, to show everything they got within the 5 minutes this song takes. Heavy guitar riffs, cheerful melodies by the violin, grunts, clean female vocals and a beautiful part where both vocalist Laura and guitarist András sing together. Everything a folk-metallover could wish for is in this song!
The rest of the album is from the same, high, quality. The music is catchy, harsh, melodic, but it never gets over-the-top or stereotyped. As you might have guessed from the song-titles, the band sings in the Hungarian language, which gives the music an unique touch. While this band clearly has its own style within the folk-metalgenre, this band is best compared with Arkona.
To answer the question if this record means the final breakthrough for this Hungarian band; I really hope so! The music is of excellent quality, and could easily compete with the bigger bands from the genre. Fans from Arkona, and from great Folk-metal in general, should check this band! There is a clip from the song ‘Hajdútánc’ which can serve as an excellent first encounter with this band.