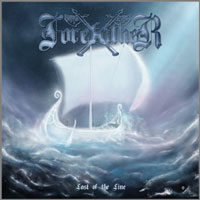 Last of the line is an album released end last year by the English band Forefather.
I’ve heard the record the First time only two days ago, I had just wrote the review on the new Svartby album. At first I thought this was the cause when I thought after 37 minutes (this CD is that short) it was a little bit boring CD.
I gained courage and I put ‘Last of the line’ on again today. But still I can only draw the same conclusion.
‘Cometh the king’ is really a intro to the album. I’m very fond of nice intro’s, but if intro’s start like all other songs with guitar and drums, I like this less. The first real song is ‘Last of the line’, and it can’t get my attention really. It’s all to neat and thought trough. No catchy riffs, not a sentence to cheer along, just nothing special.
For the second track goes the same.
‘By thy deeds’, the third track, this one’s a lot better, it’s not really a song for me, but I can image some people like this one.
There’s hope for Forefather with their long history, because ‘Wolves of prayer’, is a strong song. If they would maintain writing songs on this level, the next album would be rated much higher.
One last addition for everyone if you like the album or not. Listen to the last track, ‘Into the Rising Sun’, again. Sit down, preverably in the dark, and close your eyes.
I don’t need to have this one in my collection, but when you like the less rough work and likei t when it’s all a bit more neat and tidy, you probably like it. It has een number of nice tracks, but it’s mainly very easy going and not catchy enough.