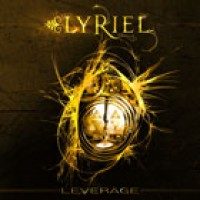 Wow, the new Lyriel, I’m very curious about this one. Lyriel is just as bands like Midnattsoll wandering the borders of folk. Every now and then folk influences appear. So, what their gonna do with this album. Do they move towards folk-metal or otherwise.
The CD starts with a completely inappropriate intro. It’s not exciting en adds nothing to the album. The first real track is the title-song ‘Leverage’, a typical Gothic metal song. Not really great, but it can do.
‘Parting’ begins with an fine folk tune op violin. It’s at all means the most folky sounded track on this record. The song has a nice combination with a Gothic approach, which gives a nice sparkle to this song. After this it’s mainly Gothic metal. Striking are the suddenly German vocals in track seven and nine. There are a lot of bands singing lyrics in two languages, but for one reason or another it’s hits you at ‘Leverage’. I have to say ‘I like it.’ It takes the band out of the baker’s dozen feeling.
The fans of a more folky sound will not like this CD really. But it’s a sound album and really not bad at all. The fans of Gothic metal will like ‘Leverage’ better.