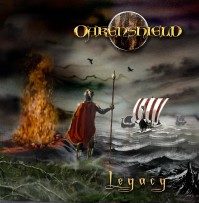 Oakenshield released a new album, this time not a production of his own. Soon after de release of the demo ‘Gylfaginning’ Ben Corkhill could sign a with Einheit Produktionen.
Listening to the previous album of Oakenshield I had the idea I was listening to Falkenbach. I still have this feeling. But it has to be said, this onemanproject has grown.
The album opens with a fantastic intro, from a musical point of view this is maybe the best track of the entire album! Very mysterious, nicely build up and with a good use of instruments.
With the First track ‘Earl Thorfinn’, the vocals start rather weak. On top of this, it should be much nicer when the intro and the first track should have flown in to each other in stead of hitting of like this. On the entire album the vocals never get fully developed. Jorvik is not a very special track. In ‘Mannin Veen’ there are no vocals and it sounds a little darker. This is a bit different from the other tracks and Oakenshield shows he has developed. Unfortunately the information we received with this album, doesn’t give us much information on ‘Legacy’. So we have to guess about the ideas behind the tracks.
‘Wen Heath’ and ‘Clontarf’ also sound nice, but not outstanding. Every now and then the speed goes up, but ‘Legacy’ is more an album to listen to. Performing isn’t easey on your own, but for this CD you have to sit down and listen.
‘Eternal as the Earth’ is a nicely build up, but again the weak vocals ruin the song a bit.
The last track is ‘The Raven Banner’, second to the intro this is the best track of this album and a worthy end. Instrumentally this is a very good album. All elements for a Falkenbach album are present this time again. There are Scream-vocals, backing choir, epic guitars and a lot of flute. Fortunately Ben Corkhill is less tedious compared to Vratyas Vakyas. But on the other hand, all subcultures of Folk-metal begin to sound like each other. It’s nice to have another band in the epic folk-metal and in some tracks a slightly own influence can be heard.
Maybe Oakenshield has to create a next album in the way het did the intro on this one, because this is a very nice one and completely different from the rest of this album.