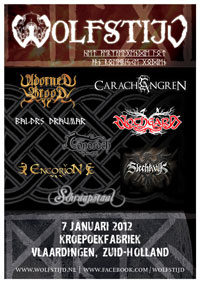 The Netherlands have gained a new festival! On the first Saturday of this brand new year, it was the first time for Wolfstijd festival, a festival with power-, folk- and blackmetalbands. Wolfstijd itself was well-organized, drink were cheap, location and the line-up more very good. There shouldn’t be anything else necessary for a very fine day of pounding metal!
There were 9 bands that would climb on the stage this day. Three representatives for each genre. Hereby a report of all, for folk-metal.nl relevant, bands.

Slechtvalk
Slechtvalk was the second band playing at the Wolfstijd-festival. I entered shortly after they kicked off, to have a glimpse of the Dutch black-metallers. And I can be short, it wasn’t much. They were fine musicians, the sound was good. But the band looked almost dead on stage and it was a boring act to watch. Every now and then, they got rid off some loose hairs, but that was all they’ve got. The keyboardplayer even seems to sleep the most of the time! The audience, mostly standing in the back of the hall, responded with only a polite clapping at the end of each song. This was a shame, because there’s nothing wrong with their music.
Score: 2/5

Baldrs Draumar
Baldrs Draumar shows after this, how it has to been done. It’s still very quiet in the ‘Kroepoekfabriek’, but it seems this the band can’t care less. From the very start of their performance they make the whole thing a real party, they seem to really enjoy playing. Even the fact the audience isn’t very ‘warm’, it doesn’t seem to care Baldrs Draumar much. They’re like a hurricane blowing their songs one by one in the audience. This is truly a treat to listen and watch! An extra compliment for the fine sound, it was nearly perfect. A wonderful show by these Frysian Friese Folk-metallers!
Score: 4/5

Encorion
As smooth as things went with Baldrs Draumar, as problematic it went with Encorion. The band had huge problems with their sound, in the end the violin was completely down. Also the band was a little static on stage, fortunately they loosened up a little. As a special treat Encorion brought a few female dancers along today. This was very nicely done, and an original idea! Hoewel het geluid niet meezat bij deze heren en dame, was het uiteindelijk toch een degelijk optreden.
Score: 3/5

Conorach
Conorach, a Dutch band as well was the next in line. And they also were obviously having fun playing at Wolfstijd. The played tight and in they played rapidly a lot of songs. Although there was somewhere halfway a slight dip (caused by an in my opinion to long instrumental intermezzo), this was quickly restored with sing-alongs like “Störtebeker”. The band promised people in the front a free beer and this turned out to be a fine solution to get people from the back to the front. And as promised, frontman Jacco gets a small barrel of beer en empties this above the audience.
With ‘Messenger of Kings’ Conorach ends this rock solid performance.
Score: 4/5

Adorned Brood
Adorned Brood had the honour to be the last folk-metalband of this day. Although the band is fond of the limelight for years now, they didn’t break through to a larger audience. This isn’t caused by their achievements on stage, the singer looks like a real Viking, and the band played eager and full of passion. It was a shame they had problems with the sound also, this was especially the case with the flute. And that’s a pity because this is a very serious aspect of the Adorned Brood sound. This made it look a bit messy. But this performance was also solid as a rock, nothing more and nothing less.
Score: 3/5