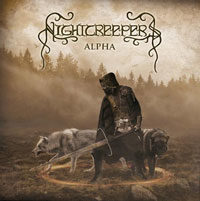 This time I get to discuss the new album of a group Frenchmen. Most of you probably don’t know the Nightcreepers at all, or not much, but I’m fan of these group for quite a while now. In the 6 years this group is active, they’ve been quite productive, and this album is, in my opinion, a big step towards a more mature sound.

‘Stronghold’ is the intro, glorious and bombastic, but also mystical as usual with these French´.
With a intro like ‘Stronghold’, you want more. As the music stocks, a guitar starts to play and a bass follows… ‘A guild is formed’!
The Nightcreepers is a band with a very own sound, which is somewhere between bands like Finntroll, Baldrs Draumar and Alestorm. Sometimes it´s more towards the one, then more towards the other. Most songs are up tempo with a very happy tune in it, but yet there are heavy guitars and lots of shouting and grunting. The sound of these guys is a full sound with a keyboard and an accordion.
Tale of haste is another perfect example how to make a really fast song on a most happy way, as these folks get to Holland I see many fans go wild on this music.
Something that you will notice during the album is that all the songs are very different from each other. One song has more guitars, the other more accordion. One has more grunts, the next one more growls. One has got lots of riffs and the other one has more accords. But yet all the songs are making one album, not just loose songs.
In the song, ‘Stormbringers’, is a very new part I didn’t know from these French´, a very good Markus Toivonen alike piece of vocals. An awesome new aspect that really improves their repertoire.

Well, it could be just me, but in the intro of ‘Frozen Outland’ I hear the tune from ‘The Dragonborn comes’. But this IS a very strong song with all Nightcreepers elements in it, and if you ask me, this is the strongest song from the album so I want to mention it here for you.