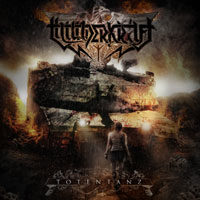 Thunderkraft’s will release a new album ‘Totentanz’. The music I’ve heard from this band in the past, had a noticable amount of folk in it. But the promotor warns me, Thunderkraft is not pure folk-metal.
The band is capable of one thing for sure, they invented, completely in good metalstyle, a beautiful description of their music ‘Industrial Folk Death Black Metal.’ What can we expect from this?
The first song is clearly under great influence from the ‘industrial’ side of metal. For the second track goes the same, but here also a nice folky tune can be heard. genre. The crafsmen work steadily and theres a third track already, the titletrack Totentanz. The beginning sounds ‘bad’, is this metal, you ask yourself, but at the end of the track your opinion will be changes and you will play it again I think. The song calls Trollfest in your memory. It’s not a copy op Trollfest but it’s in a kind of same way weird. It’s delicious chaotic, there’s many weird stuff in their music and the sounds is insane.
At the track ‘Death won’t separate us’ the band show us a fine piece of what they’re capable of. And this is again a song that goes everywhere, nothing involves in a straight line, and you’ll get suprised over and over again, in a nice way.
Listening to ‘Towards a New Dawn’ I thought: why not put ‘Symphonic’ in the description of the music. A nice song, a lot easier compared to the other songs, almost a ballad but… even here unexpected stuff.
Well, what do one have to say about a piece of work like this? I’t a very well organised chaos, that’s the best desription in my opinion. Do you like bands like Trollfest, I think you can appreciate this album too. Thunderkraft has put a nice album together with this one.
When you do not like ‘weird’ musical stuff zaken: keep far from this one. But my advice is, go and listen at least one of these tracks, because it remains remarkable what Thunderkraft brew for us.