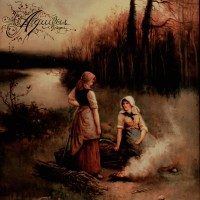 Sometimes, an album needs time to reveal it’s true beauty. Only after countless times of listening, you can hear the beauty behind the work, the magnificence of the music which seemed dull and boring after the first time of listening.
Aquilus delivered exactly such an album with Griseus. Aquilus is a one-man project, and delivers with Griseus his debut. The style of the music is at least extraordinary; atmospheric black-metal with clear influences of classical music and folk.
The result of this daring mix is quite good; complex, epic and long songs, with atmosphere as the most important aspect. Pieces of music which sound like they came directly from a composition of Mozart are impressively alternated with harsh, even swinging, black-metalpieces. Furthermore, the folk isn’t forgotten. Dreamy intermezzos in the songs result in the songs becoming varied and interesting.
And that is the most important aspect of this album; variation. While the songs are all really long (one has a total playing time of 17 minutes!), it’s interesting to listen to because of the intelligent compositions.
I could recommend this record to all who can appreciate ‘non-standard music’. Aquilus made an unique debut record. Give it the time, because it takes a few listening-sessions before the true beauty reveals itself!