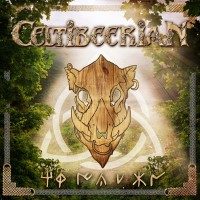 It was just a matter of time before a band tried to make the same kind of music as Alestorm. However, here it is! Celtibeerian, a Spanish folkmetalband which just released their debut called ‘Tirikantam’.
Musically speaking, Celtibeerian is right between Alestorm and Korpiklaani. Especially regarding the vocals, which are close to Alestorm. However, the vocals can’t really convince, and from time to time they even sound out of tune. In terms of the music, it sounds more like Korpiklaani because of the addition of flute and violin. It doesn’t sound original, but still pretty nice. The songs are mostly up-tempo and are easy to listen to.
Also, the lyrics don’t deserve a prize for originality. Nontheless, this must be the first band which resolves a full album around organizing a party, and the feast itself.
This is typically the kind of music you turn on during a party; guaranteed everybody will party. However, the music itself isn’t really special.