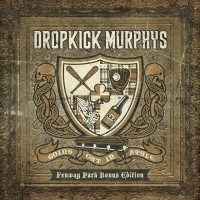 ‘Going out in Style’ from Dropkick Murphy’s has been released in 2011, but was re-released this year as a special edition. In this edition, a live-disc is included where the band plays in front of 20.000 fans. And a download link of the filmed concert.
What’s to say about Dropkick Murphy’s? This band from Boston is one of the pioneers of the folk-punk, and remains one of the biggest bands in this genre. ‘Going out in Style’ is their 7th full-length record.
On this record, the Dropkick Murphy’s seem to go back more to their roots of ‘folk’. They frequently use bagpipes, banjos, and more of those instruments. The songs on ‘Going out in Style’ are fast, providing excellent songs to party.
That this can be done is proven on the second disc, the live-performance at Fenway Park. A lot of different songs from the long history of Dropkick Murphy’s pass by, with ‘I’m shipping up to Boston’ as the main highlight. The sound of this disc is really clear, which is immediately the most negative aspect. The sound is so polished and clear that it doesn’t sound as a live-registration any more.
This release turns out to be superfluous. Going out in Style was already released, and was a descent record. This special edition feels like a way to simply earn more cash. Nonetheless, for the people who didn’t already own this record, it’s a good excuse to buy it!