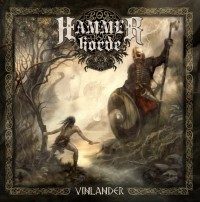 The Viking band raised in 2007 in the USA has just released their new album ‘Vinlander’. Their début-album got a warm welcome and was compared to bands like Dark Tranquility and In flames.
The first that strikes me when I look at the cover is fabulous artwork of Kris Verwimp and the style they used also in their first album. The first track smashes in, and this promises a lot. Fast riffs, hard drums and very nice alteration in the vocals is what follows. The second is the title-track ‘Vinlander’ and reminds me of Wintersun. The fast riffs and way the vocals are done leave me no other choice, but Hammer Horde keeps it in their own style.
The fast epic songs are also doing very well on their album, like ‘Hero’s Heart, but they don’t overwhelm the rest of it. All in all I’m impressed with the variety of the songs. Melodic, fast, varied, different vocal-styles. When you’re a fan of Amon Amarth and like Wintersun you have to listen to Hammer horde definitively, but of course you’ve already done this.

‘Hymn of the Fjords’ and ‘Hoddmimirs Holt’ are instrumental tracks and they’re the glue between some songs. A nice change between all the guitar-violence.
Compared to the first album Vinlander has a more consistent and of much better quality. Where Amon Amarth sound often a bit too much of the same in my opinion, I think Hammer Horde knows too keep the variety in the songs. This makes this album a nice complement to your collection.