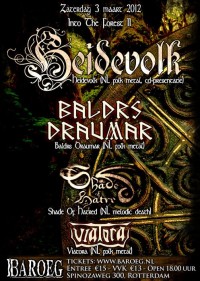 Shade of Hatred
Like they told us after the first song: ‘We’re probably not very folk, but we’re very metal!’ Meaning this band is out of our reach with their melodic death-metal. Despite of this they played a tight and brutal !
Score 4/5

Baldrs Draumar
Baldrs Draumar had, though in a less way, problems with the sound. This was noticed especially in the vocals which could not always be heard nicely. Despite of this these Friesians layed down a good show. They played a lot of easier songs with every now and then a quicker one. Their act was of a very high level, which was noticed and highly appreciated with the audience. Their enthusiasm contaminated the audience and there where a lot of heads bobbing and a lot of hair was swept through the air. Despite of the fact they could have played some more heavier songs, this was again a very good show! Fabulous!
Score 4/5

Heidevolk
Despite of the fact the evening had started very well with Viatora, Shade of Hatred and Baldrs Draumar, there was nothing which could prepare us for what was to come. Heidevolk had a big party in mind for us. Even before the show the Heidevolk songs where loudly shouted by the large crowd, from songs like ‘Saksenland’ to ‘Het bier zal weer vloeien’. It promised to be a very nice show!
When Heidevolk began to play the hall turned at once in a partying, pitting, headbanging mass. After the regular opener ‘Nehalennia’ it was time to give some attention to their new work. The alternated the new songs nicely with their old ‘hits’. It was immediately noticed the new songs are more suited to be played live. Not everybody could sing the new songs along, but it was clear the audience also liked the new songs.
I can be short on this performance, Heidevolk came, saw and conquered. The enthusiasm en eagerness to play sparkled of and their performance was very tight. The atmosphere was fabulous and the sound was great. What more do you want from a Heidevolk-show?
Score: 5/5

Pagan Reign
The Art of the Time

The Rumjacks
Live in Athens

Minotaurus
Victims of the Underworld