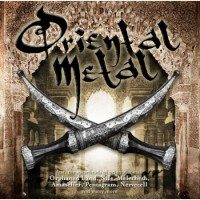 To promote Oriental Metal Kobi Farhi, the singer of Orphaned Land put together a compilation CD. We received it to write a review about it, something we’re doing with pleasure of course. This is not a usual one for our reviewers, we’re not reviewing all metal, and this is like the title suggests an compilation CD whith the emphasis on Oriental metal and not purely on folk. All bands on this CD have clearly found a source of inspiration in the Middle East. But when is this Oriental Folk and when it’s something different, it’s hard to tell. It’s very tricky to write down a conclusion and it’s surely stuff for a nice discussion. On our website we use criteria like: is it heavy and is it folky. Some bands are at the very edge of these things. A band like Kampfar for instance wanders at the borders of our site, but they’re themselves of the opinion they have folk elements in theri music. We also take in consideration if these bands think their own music is folkrelated, some bands think their music has folkelements, others don’t want to be associated with folkmusic. What can we expect of the bands on this CD, we’ll give it a try and straighten things out. It’s also for us a nice way to think some things over.
The CD starts with the delicious song ‘Sapari’ by Orphaned Land, and for this song goes, as for all the other tracks, if you don’t like Middele Eastern melodies, you won’t like it. When you can listen to this melodies, you’ll sureley listen to every second of it and you’ll know, this one matching all the criteria. Personally I love to listen to Orphaned Land.
Armaseffer ‘Slaves For Life’. A band using all kinds of elements in their music. The oriental tunes immediately hit you again, a band which is surely following the path of original oriental music in a number of songs. Therefore this is a band we should add to the bands on our website, but when we get to listen to more songs by this band, it turns out there aren’t that many songs with this clear oriental touch.
In ‘Deus Vult’ by the French band Arkan there are also clearly Oriental tunes, but the feel of this song is much less folky, for a large amount of metalfans of the rough kind, this is a very nice band.
The Turkish Pentagram (Mezarkabul) sounds also very eastern with their ‘Lions in a Cage’, the band is known for the use of Anatolian influences in their music. It sounds a lot more old school heavy metal, but again it’s nice.
Myrath is a Tunesian band, op this album their represented with the track ‘Merciless Time’, needless to say, again oriental tunes, with a somewhat less metal voice. Nice band for the ones who like the oriental elements in the music, but are a little afraid of the pure metalviolence.
It’s time for Almana Shchora from Israel, we get the song ‘Elohim’. A somewhat oriental version of an In Extremo song. A very nice track, but when you get to listen to other songs of Alman Shchora you’ll notice ‘Elohim’ is a bit exceptional for this band.
‘The Taste Of Betrayal’ by Nervecell is probably the least oriental track on this CD.
Khalas is an Arabic Rock band also from Israel, funny track, not real metal, but do you like to get in an Middle Eastern holiday-mood and you don’t like the smooth radio-songs but you don’t like rough metal either? Listen to this, it made me happy.
The it’s Nile’s turn with the track ‘Kaffir’, a band we have in our collection at home, but surely not mine. I’ll skip it the next time, but a lot of you will know the band already. Brutal metal, with an oriental taste and this from the USA. Undoubtedly a band with a lot of fans, also in Europe, but to hard for me.
Then Melechesh, en band already on the website of Folk-metal.nl. This is one of those bands we mentioned before. I won’t listen to it easily, but they are themselves of the opinion they make folk-related music.
The CD ends with Ahl Sina, a melodic oriental metal band, founded by Oriental Trolls, the track ‘Fountains of Muses’ hits of with a real cliche Oriental melody, which gives it a certain amount of Troll. The rest is much more melodic, than it is folk.
Nice album, I don’t like everything though. But Kobi has done a perfect job with this compilation. This album will surely draw some attention to the Oriental side of metal. I will listen to it more often and it made me get to listen to more music by some bands.
A CD with which Kobi makes me think the borders of our side over. There are a number of bands that should be gives further examination. And that was Kobi’s goal, mission completed.
A little downside of the album is, when you get to listen to more music of these bands, it turns out the track on the album is not what the band usually creates. This makes it a nice compilation and the album surely shows us what can be done with all these Oriental influences.
Compilation album with a lot of nice songs, a must have for fans of Oriental tunes. I hope every alternative pub, disco etc. in the entire Middle-East puts it in its collection, so we get the ultimate Middle-East feeling when we’re on holiday. I’ll listen to it regularly at home.