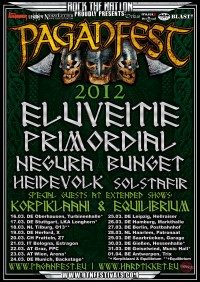 We have a fixed value in the folk-metalscene for over a couple of years now, it’s called Paganfest. This years also the whole company travels through Europe, and also this time they have a varied line-up. Unfortunately due to some interviews we had with Eluveitie and Equilibrium we couldn’t see all bands.

Sólstafir
Sólstafir had the honour to kick off this year. And they were an ideal band as opener. With a lot of smoke they created a mysterious, almost cold atmosphere, matching perfectly with their music. Slow, atmospheric and melancholic. It was remarkable the audience stayed this quiet, there was not more than a polite clapping and an occasional arm raised in the air. An ideal, slow start previous to the heathen force which was to come.
Score: 4/5

Heidevolk
Heidevolk. From the First note, the whole venue was a nice chaos. Where the audience was quiet at Sólstafir, it went crazy with Heidevolk. The crowd changed n a pitting, partying heap. Heidevolk couldn’t do much wrong today. They played a varied set, with the focus on the recent album ‘Batavi’. The new songs were easily swallowed, but the roof went off definitely with hits like ‘Saksenland’ and ‘Vulgaris Magistralis’. The only disadvantage of Heidevolk at Paganfest remains the fact it always ends to soon
Score: 5/5

Equilibrium
After Negura Bunget, when most people fled to the nearest fastfoodchain, it was time to bring back the party Heidevolk started. Equilibrium layed down a fabulous set with a lot of variation. Hits like ‘Met’ and ‘Blut im Auge’ cam along and of course a lot of songs form Rekreatur. This wasn’t all we got although. Because out of the blue Equilibrium started a very familiar melody. They played the title-track of the recently released game ‘Skyrim’. Very nice, and it showed once more the band doesn’t take it all to serious. Compliment for Robse, the new singer, who has grown incredibly as a front-man. Where he was somewhat a stranger before, he’s now the main man of the band.
Equilibrium played very tight, and they got the audience to move easily. But what else do you want, with one up-tempo song and the other energetic song after another?
Score: 5/5

Primordial
Primordial was a little bit a disappointment after this. It was much too loud, which was the cause the subtlety which is very present in their music to be blown away. The music ended up in a great bowl of soup. It was also noticeable the music of Primordial is not easily digested by all listeners, the reaction of the audience minimal. A pity, because the band could, with a better sound, be a nice change between the other bands. Unfortunately we couldn’t make much of it this way.
Score: 3/5

Eluveitie
Also Eluveitie had also problems with their sound. The drum was to much present in the mix, and the hurdy-gurdy could hardly be heard. This couldn’t spoil the fun, because Eluveitie knew to get the audience moving for a last time. During the whole set there was a lot of pitting and partying going round, at new and older work. The emphasis this evening was on the newer work, this of course while ‘Helvetios’ is recently released.
It was nice to notice the complete set-list was worked up. Hits like ‘Inis Mona’ shall always be a part of the set-list, but this time it was -finally- got ‘Calling the Rain’ out of the mothballs, one of my personal favourites. In this way Eluveitie pleased old and new fans.
All in all a more than worthy finalist of this edition of Paganfest. Eluveitie managed to shake 013 for a last time, before everyone could go home, tired, but very satisfied.
Score: 5/5