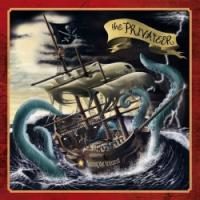 And another pirate metal band… This was my thought when I got ‘Facing the Tempest’ by The Privateer to review. The genre is totally chewed by a lot of bands, which mainly want to get a ride on the success of Alestorm. But this is different!
The CD starts of with the sounds of a ship at sea. Splashing water, a laughing pirate and in the background, very quieter a merry tune. Then it becomes more serious with gunshots, screaming and clashing swords. Halfway the musical violence begins and to my surprise it sounds very nice. But what’s the violin doing in this? It’s a bit out of tune. Fortunately the album goes on.
‘Awakening’ (the intro) changes to ‘Dawn of a Sailsman’ and this isn’t done nice and smoothly, but the rest of the song is good.
The vocals are also very different than I expected from a pirate metal band. No false clean vocals, but scream alternating with a kind of clean vocals. And halfway the song a kind of singing which surprises me completely. How do I explain this, it’s a kind of choir. Wow, this is a nice and catchy song!
‘The Last Journey’ contains nice guitars and solid drums. The nice thing on this album is, there are long instrumental pieces, so there’s enough space for solo’s, the tracks are all quit long. In this song, there are also female voices introduced, which fits in perfectly.
The lyrics are about lost treasures, far-away worlds and old myths of the sea, not totally worn out topics.
‘Descent to Hades’, ‘Blackbeard’ and ‘Port Corrad’ are also three very nice songs. With a nice male/female singing, ‘Descent to Hades’ reminds a little of Nightwish. In ‘Blackbeard’ the piano messes up a little, the melody is too bad and too simple, it’s a pity! Fortunately it disappears quickly. In ‘Port Corrad’ they do the same with the accordion, it has to remain piracy after all.
In ‘Basilisk’ the vocalist tries to sing low, which he really shouldn’t attempt. When you can’t do it, don’t try to force it.
The first half of the album is better than the second half, but with ‘Stormlashed’ they put down a very nice end to the album.
Get rid of the shabby pirate-outfits and in some cases the violin, and there get an excellent band!