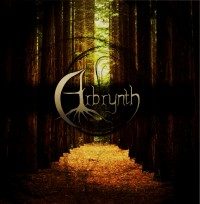 Arbrynth by the Australian band with the same name sounds through my boxes. And when it starts I’m immediately thinking: Wow, this can be a really nice one.
But when after a short time a somewhat dreamy voice is added, the music struggles to keep my attention. A pity when this voice appears to be an essential part of their sound later on. Despite of the fact the band tries to keep their compositions interesting by making all kind of changes in it, the dreamy voices are an ingredient which make the sound not easier to digest. The female voices are also very dreamy. And this is a pity because Tina’s voice has a very nice touch, her voice takes the sound a little bit toward the Gothic direction, as we hear more often with female voices.
But the music really suffers from their way of singing, it just doesn’t get exciting. The songs are all very long. Seven minutes for one track is nice, but you need tension and alternations. The last ones are there but it lacks tension. Even the nice song ‘The Raven’ becomes a little boring after a while. It could be a nice song if it was a lot shorter.
The band doesn’t make it easy for themselves, with these long tracks. In my opinion it should be wise to shorten the songs and to try to keep the tension high. The music often sinks away, causing the strong pieces to drown in an overall dullness of the rest of the music.