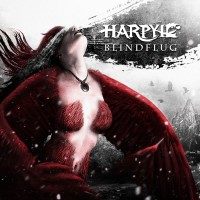 We’ve received the debutalbum ‘Blindflug’ by Harpyie, a new German Medieval Rockband. And despite of the fact there are a lot of bands in this genre, Harpyie has a unique sound.
The intro ‘Gen Siebenbyrgen’ fits nicely to the opening track ‘Hunderdreyssig’, a funny song, which immediately lays out the style of the band. Steady rock, completed with bagpipes.
The band slows down a little in the song ‘Niemand Meer’, without loss of style. At the fifth track, the vocals get a little boring, the singer doesn’t have a very special voice. And it’s all a little bit to polished, which causes a lack of tension in the songs.
The song ‘Lunas Traum’ shows what the band is capable of. A nice track, which quiet pieces which flow into a very nice refrain, with delicious solid bagpipes.
The ballad ‘Legenden’ is an utterly boring track, which is unworthy for this album.
When we go on with ‘König und Bettler’ the lack a of a very special voice becomes very clear. The song isn’t bad, but for some reason it doesn’t get interesting.
A varied album, a little bit to polished, with vocals which can’t keep your attention everywhere. The are some nice pieces on it though. Nice bagpipes, nice compositions, but it could be produced better.