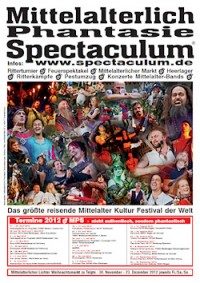 When I look out of my window it doesn’t look like it, but it’s true, the summer-season has begun. And that means there are Open Air festivals again, but also all kind of related events. In the Netherlands we have the ‘Elf Fantasy Fair’, but the west of Germany has the MPS or Mittelalterlich Phantasie Spectaculum. An big event traveling in the border-area from 21 April until September.

A very nice event for the fans of a broad folk-genre and fans of all kinds of Medieval stuff.
Saltatio Mortis is present again this year at the entire tour and in Weeze also Ignis Fatuu was present. But unfortunately both bands only on Saturday. But there was enough to listen to, because there were a lot of less heavy folk-bands on Sunday. The spectacle in Weeze was this enormous, we had to puzzle a lot to make a schedule in which almost all bands fitted. We managed to work out such a schedule, but with four stages where bands play multiple sets and besides this a wide range of other activities it was quite a puzzle. But I can already say, it was fantastic, what a very very nice spectacle was put down.

A few minutes to eleven we are at the gates, so nice in time for the beginning of this day of the spectacle. After a little stroll along a part of the festival-area. We got to the trio Duivelspack. We say the guys at work last year, when they played unplugged along the path. This time they acted on a stage with a little amplification which was a nice improvement. The gentlemen entertain the audience with comic songs in a medieval coat. Unfortunately to them (they made that obvious when we left) we saw them last year and we decide to move on after a few songs. We stroll along a large number of stalls with jewelry, mead, medieval clothing and other trinkets, until we finally arrive at the next stage where we get to see the last song by Metusa.

After a little while Braagas from Prague enters this stage. These ladies and 1 gentleman show us a a very nice different kind of Medieval folk, an Balkan edition. And I must say also Balkan-folk in Medieval disguise sounds nice. It’s all somewhat subdued compared to the western Medieval folk which has mostly a large content of drunks.

After the show of Braagas we walk a little, looking at some stalls, a mouse-roulette, a medieval surgeon, and some eating knights, until we get to Die Streuner. A nice piece of happily drinking folks, by some of us known by their covered by Black Messiah song ‘Soeldnerschwein’. The weather and technique are not on the bands side today. When finally everything seems to sounds like it should, an enormous rain shower hits the festival. Something which tortures the band the whole day. Or like Reliquidae mentions later on, are die Streuner going to play again because it’t going to rain, or is is going to rain while die Streuner are going to play. A shame, because the band has a very nice repertoire, in which they involve the public a lot. I suggest, you don’t go to see this band with your hands in your pockets, they’ll find you for sure.

After this we hurry back to another stage for a piece of Vermaledeyt. Wow, I would have liked to see more of them. I listened to them on myspace and it couldn’t grab me then, but live was a lot nicer. It sounded all a lot heavier and more swinging. Nice Medieval Rock with bagpipes, hurdy-gurdy, reed pipe etc.
Then it’s time for Metusa, this is a little disappointing, it’s all to neat and tidy for me. Also the voice of the singer is going to crack, which doesn’t help their sound. After a few songs we decide to move back to die Streuner. But when we hear them, our attention is drawn to some fighting knights of Fictum, giving a very good show with a nice touch of humor in which they demonstrate the use of several Medieval weapons.

We’ve got hungry after all this entertainment and it’s time to get a nice Medieval meal. And this appears quite difficult because there is a lot of it. All kinds of meal based on bread, but also soup, very nice filled bread, meat skewers, but also some sweater meals. Finally, enjoying our deliciously filled bread with meat we’re looking at Reliquidae. And this is also a very nice Medieval rock band. The loudest op all the bands see today, just below the Saltatio Mortis level, just outside the Folk-metal.nl range, but despite the lack of heaviness, very nice. The only minus are the vocals, they could be better.

After a little shopping we were just in time for Saor Patrol, a band which I saw last year on MPS in Borken, and which was a very pleasant surprise then. Do you like bagpipes and do you like percussion? Then Saor Patrol is your band. When you look at their line up, bagpipe, three percussionist and a guitar-player, they are complete insane or brilliant. The last one is the case. The fabulous percussion rithmes lay down a nice base for the famous whining sound of the bagpipe, the guitars fills in the gaps and voila there is a masterly and unique sound.

After this there’s the evening concert of the Dutch guys of Rapalje and that’s never unpleasant. The fine musicians showed again how to put down a nice set and they form one of the main acts for all the MPS festivals. Tonight they were supported by three guests. We could enjoy a nice piece of dancing, but it seemed to me the gentlemen added a piece to the song, which was very tiring for the dancer. We could also enjoy a nice duet by a ‘local’ lady and William, performing a lovely version of ‘Caledonia’. And a very ‘not entertaining’ dance-act by a ‘local’ drunk, who was also very bad at the game ‘hints’.
The audience could tell their merchandise which songs they wanted the four-piece to play all day. And they showed their incredible skills in their performance, there are only a few bands which can switch this easily on stage and react to each other or all kinds of stuff which happens along their gig. A show by Rapalje is always entertaining, exciting and surprising.

After all this we went home completely satisfied, a wonderful day, it remains a spectacular event.