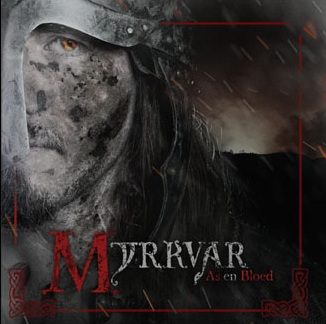 After four years Myrkvar finally released a follow up of ‘Als een woeste horde’.
It’s ‘As en Bloed’ entitled, and I thought this is a very though-through title which created high expectations.
Unfortunatelly the album was a little bit of a disappointment at first, this was mainly caused by the first songs.
A careful and fragile intro which slowly becomes stonger, forms the beginning of the album. After this lovely intro you get woken up harshly by the first real track,’Voorspelling’.
After this the song ‘Nagelschip’ follows, a song which can’t grab me really.
Myrkvar went on along the path we were used to by them. Solid with a very noticeable violin. There’s only something with the vocals, the voice is a little irritating and quite monotonous. Fortunately it turns out later, this is not the case on the whole album.
The guitars sound very tight and solid, though I was hoping for a little more variation or solo’s in it. There’s plenty of space for the violin-player, but I’m missing this with the guitars.
In ‘Gjallarhoorn’ there are some low vocals added, but they seem to be to low for the vocalists, but it has to say the song sounds interesting and it has a nice violin-piece at the end.
‘Asenbloed’ has a kind of party-speed, which changes fortunately after a little while.
With ‘Twistengod’ they’ve finally found a nice speed. And clean vocal! Wow, this is very pleasant after all the screams. And this is a very nice song, with a lot of different elements. A long but very complete song with some whispering vocals in between.
And also ‘Baldrs Dood’ starts off with clean vocals and shows to be a nice composition. The second half of the album sounds a lot better than the first part. A pity because the first songs are very important to make a nice impression.
‘Widars Wraak’ and ‘Donderslag’ are both nice songs. Finally: a guitarsolo!
I expected to get a smashing end of this album with ‘Uit de As Herrezen’, but it appeared to be the opposite. A violin-piece with piano and heavy drums. Not a bad ending at all. The album ends quietely like it began.
The first time I listened to it, the album was a little bit disappointing. But when you listen to it a few times it sounds a lit better. It’s an release which needs a little time.
It’s a nicely mixed album and I like to congratulate Myrkvar especially with the nicely found title and the beautiful cover. Really nice!