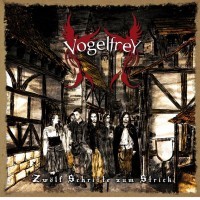 Vogelfrey already surprised me. The First time was when I saw them live, at Hörnerfest. Shortly thereafter, when I was listening to the debut-record of the band, they surprised me again. Therefore, I was really curious what Vogelfrey would deliver with their second album ’12 schritte zum strick’.
And as soon as after the first listening-sessios, I was overwhelmed. Vogelfrey always had a clear, own style, but on this record they define their own style even more. In comparison to the previous album, this album depends more on the huge variation. A lot of influences from other genres can be heard, without denying the Vogelfrey-roots. For example, ‘Der Tusch’ is an ode to the classical music, while ‘Lindwurm Massaker’ has a lot of influences from old school heavy metal. This musical variety becomes a beautiful unity due to the characteristic voice of vocalist Jannik.
Furthermore, harsh and powerful songs are alternated with the softer songs in a perfect manner. The extremes, however, are further away from each other than ever before. So is ‘Freitod’ probably the heaviest song the band ever made, even using grunts! The song thereafter, ‘Sommer’ is probably the calmest, most timid song in the Vogelfrey-repertoire. And of course, the opportunity to party is provided with ‘Schuld is nur der met’.
In this way, this album offers a wide variety is offered, so it never bores to listen to it. However, a clear style can be discovered, creating a unity throughout the album. For each and every folk-metalfan there are some likeable aspects on this record, whether you like calm songs, epic partysongs or heavy metal anthems.
In short, ‘12 schritte zum strick’ has become an amazing album with which Vogelfrey can easily compete with the ‘great bands’ like Saltatio Mortis and In Extremo. Definitely a must-listen!