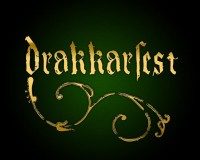 Viatora
Viatora had to get on stage as an opener of the festival, but there were only a handful of people. A pity, because they performed very well. Enthusiastic, fanatic, inspired they played their catchy folk-metaltunes. It sounded good. A pity there were only a few people, otherwise this could have been the first party of the day.
Score: 3/5

Nornagesta
The second band, Nornagesta, couldn’t impress that much. The performing was very static and the interaction with the audience was very low. The music sounded a bit messy and chaotic, which caused they couldn’t really reach the audience. Too bad, because individually it are all fine musicians.
Score: 2/5

Amorgen
Amorgen showed how it had to be done. Like a hurricane they came on stage, en they delivered a nice gig. They played tight, and were clearly enjoying it. It was again not very crowded, but Amorgen solved this by calling the audience to the front. The sound was again very good, which was especially nice with songs like ‘Sharpen thy axes’. Great performance!
Score: 4/5

Conorach
After this it was Conorach’s turn, with their own special mix of folk- and power-metal. Like always it was a pleasure to see them live, mainly caused by frontman Jacco. This energetic singer can’t stand still, and uses all empty space on the stage to present his vocal skills. This band also manages to involve the audience, they bring out a barrel of beer and empty it on the willing audience.
Besides song from ‘Tales from the Tavern’ and their EP Conorach also brought a surprise. They played two songs of their upcoming album. There songs were very ‘Conorach’, catchy, fast, and a again this special mix of folk- and powermetal.
Score: 4/5

After this there was a special pause to eat something in the programme. I’d never seen this before, but it turned out to be ideal. But it appeared to be a little short pause, causing a somewhat less filled hall in the beginning of the next act.

Rhovanion
Rhovanion. Catchy folk-metal in Eluveitie style, with a large amount of traditional instruments, from violin and flutes to bagpipe.
Rhovanion played well, but they were a little static on stage. This didn’t hold them back to make it a real party. Especially the covers which tey played were appreciated by the audience. They played ‘Tegernako’ (Eluveitie), ‘Vodka’ (Korpiklaani), and ‘Keelhauled’(Alestorm). Because Chris of Alestorm was present, he say along with his own song, very nice!
All in all a nice gig, strong varied songs. Surely worthwhile to see this band sometimes!
Score: 4/5

Grimm
The atmosphere build up by the cozy and catchy music of Amorgen, Conorach and Rhovanion was completely killed by Grimm. Nicely done, a dark hall, only candles and torches on stage. The music didn’t reach the audience. The sound was too matte. It sounded all a little to repetitive to keep the attention. Also the performance was not at it’s best, a band completely standing still for an hour is not a pleasure to look at.
Score: 2/5

Lemuria
Lemuria showed how you this this properly. Solid metal with a large number of orchestral elements was what the Belgian sextet brought us. Singer Niklaas turned out to be a real charmer who knew how to turn on the listeners. Another nice idea was the fact they brought their own ‘crowdentertainer’. This guy jumped around and pulled the rest of the audience along. This was working, there was a lot of headbanging, pitting an even one or two crowdsurfers came along. The party was complete when the singer told the people to dance along arm to arm.
They played inspired, enthusiastic and was obviously enjoying it. The sound was very good and they played well. The best band of the day by far!
Score: 5/5

Myrkvar
The day had not came to and end, this was a task of Myrkvar. A lot of people didn’t realize this apparently, because there even less people then at the beginning of the day. A pity for Myrkvar who were working very hard. They threw a little party. The guitar-player walked at the head of a merry polonaise. It was too bad there were this few people, because the music of Myrkvar is much nicer with a lot more people.
Score: 3/5