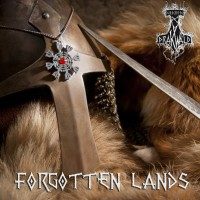 From France emerges Drakwald, six people who try to combine elements of traditional folk and Scandinavian death-metal. This sounds a bit like almost all the folk-metalbands nowadays, so is Drakwald able to add something new and original to the scene?
In short, the answer is ‘no’. The first demo ‘Forgotten Lands’ doesn’t offer anything we haven’t heard before. Catchy flute and keyboard melodies, harsh guitars and a brutal grunt, with along the line some manly choirs. It sounds decent, but it never transcends the middle-class.However, this record shows a certain kind of potential. Though it all sounds really standard, the musicians play well and clearly show that the band members have it in them to make decent folk-metal. With more original compositions this band could cause a surprise. Until then (unless you want to hear everything in the folk-metalgenre) you could better disregard this band.