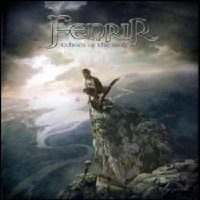 Folk-metal.nl received a tip about a French band Fenrir. Of course we immediately added them to the bands on our website, but we also found out, they had just released an debut album “Echoes of the Wolf”.
And while we tried to do a review on all folk-metalalbums this year, we want to review this one as well.
Hint: Of course we all put the volume wide open when we’re going to listen to folk-metal, but do it with this one also. It doesn’t have to be that loud you’re neighbors are complaining, but when you might think otherwise if you hear this the first time, it’s music which can use a little volume.
Ready? Come along. The album hits of with a beautiful intro, of course with a lot of violin, because Fenrir has two violin-players, fairly unique, but I can assure you, it’s beautiful, these guys know what they’re doing.
With the second track ‘Morigan’s Fury’ you immediately get the second surprise. No metalvoice, no rough vocals. A clear female voice, but again Elsa knows what she is doing. And despite of the fact the vocals sound quite classical schooled, it’s not a Gothic kind of singing. The way of singing is in this genre quite unique, I can’t think of another band with this kind of singing. Maybe you have to get used to it, but give it a chance, and then is sounds beautiful. And the guitars are quite clean in this genre. But they sound nice and quite heavy, also in this up-tempo song.
And it goes on like this. In ‘MacBeth’ the band shows again how skilled they are, the violins are never too strong, but they are very present every now and then. The song had also a very nice choir, which gives it a nice atmosphere.
Fenrir is a quite different song which takes you along through the mysterious world where Fenrir goes dwells around. How do they achieve this?
In ‘The Tale of Taliesin’ they show they can do slower songs as well, but it never bores while it has all kind of nice changes in it.
And of course the speed goes up in ‘The Battle of Stirling’ as the title may suggest. And the album goes on for a while with no less than 15 tracks. And I have to say, it’s never boring. Of course we get a nice outro in the end, as may be expected from these gifted sextet. ‘Gaya’ in which the violin play a very nice part.
An beautiful album, with very little negative points. It’s definitively not suited for the fans of screaming guitars, grunts and metal-screams, but do you like to listen to ‘something completely different’, you have to buy ‘Echoes of the Wolf’ by Fenrir for sure. A beautiful album by a six very talented musicians. Taken the fact, this is a debut album, they get the full 5 point for it. The only thing one will ask himself is: What will the second album be like?