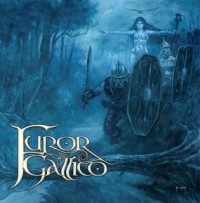 Furor Gallico, a folk/celtic metal-band from Italy. After a demo in 2008 they released an debut album in 2010, entitled ‘furor gallico’.
And this was a job well done. The first thing you notice is the artwork by Kris Verwimp, together with the bandlogo, you can make a good guess of the their style.
And it exceeds your expectations. Flutes, violin, Celtic harp and a bouzouki make in combination with nice heavy guitars a nicely balanced folk and metal mixture. The vocals vary form clean to low grunts and a somewhat higher grunt,which is a nice alternation.
Sometimes the folk instruments give a more medieval impresseion rather than Celtic, but this makes it only more exciting.
The sound is fine, the instruments are nicely mixed and guarantee it to be nice to listen to. There quite a lot of songs on this CD, 1/3 of them are even longer than six minutes. But their not a punishment at all and their nicely alternated with some shorter ones.
To compare them with others, the low grunt in combination with the flutes remind me of Svartsot, but Furor Gallico is much more divers and they will appeal to a larger public.

All in all a very enjoyable album and we wait with pleasure of more to come!