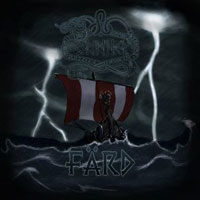 Grimner releaded a ‘mini full lenght’ “Färd” entitled, they were of the opinion the quality of the recorded songs didn’t allow them to drop one of these songs.
The first track is Vargamarsch, a nice intro with some choir-like vocals in the background, the end of this intro is somewhat classical, with is a bit of a shame in this case.
The they go on with the titletrack, fierce guitars, low vocals, merry flutes it takes my memories back to the old Svartsot.
And Runstenen is also in this style. When it gets to Forna Dagar the vocals seem to get a little bit unnatural, but despite of this it’s a nice song.
Bärsärkaraseri is slightly different, it reminds of Skalmold a little.
The tracks are mostly quite long, which irritates me a little in this one. The length doesn’t add something to the track. The bonus track Völvans Spådom has a kind of Slavic feel, in my opinion they could have left out this one.
In short a nice album, but don’t expect any songs that will stick to you mind. Everything sounds nice, but it could have been more to the point every now and then. And the bonus is a nice one live for sure, but is a little out of place in this album.