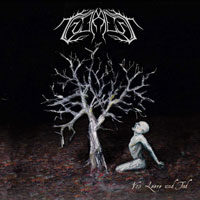 In my opinion, black metal can be divided in two kinds: the one is the kind of noise you don’t even dare to trouble your terrible mother-in-law or your annoying little brother with, since it just sounds terrible. The other kind is the more melodic kind, the one that’s actually nice to listen to. Luckily, Thormesis belongs to the second group.
There isn’t much to find about this band. The only thing that was clear to me was that these four from Germany release their third album; ‘Von Leere und Tod’. Musically speaking, the band makes a kind of black-metal which is easy to listen to, and which even sounds catchy at times. Mainly screams, and here and there some clean vocals, with grooving and pounding riffs in the background. That’s how the music of Thormesis is described best. At some moments, it even sounds a bit like the black’n’roll from Kvelertak; pure black-metal, but with a swinging edge.
While the songs last pretty long (up until 9 minutes!), these tracks don’t bore because of the variation within each track. However, the record begins to bore slightly after a few listening sessions.
In general, the unknown Thormesis deliverd an overall good record. Are you a fan of accessable black-metal, then make sure to check this one out. Don’t listen it too often though, or you might become bored.