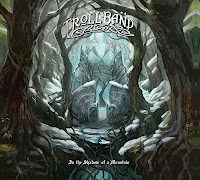 We all know folk-metal and related genres have crossed the big waters. Trollband is a Canadian duo combining trolls with Black-metal.
When you get to listen to it, the black metal is immediately clear, I guess they listen a lot to Kampfar, because that’s the music sounds like. But there is also clearly a part for the trolls, so they honor their name.
The troll-part is created through a strange, sometimes funny keyboard tune. And also the lyrics are dedicated to trolls, blood, slaughter, robbery, assault and other cruelties trolls use to do.
To make a long story short, the above is all there is. The band keeps it to this, except for one track “In the shadow of a mountain” itself, this is a strange very mysterious sound, very ominous. The lyrics have the same theme, slaughter of the enemy. But it’s a song you have to listen to very quietly, because it’s exciting, not a difficult composition. It’s more like a prelude to the rest of the album.
At the end of the album there’s a long silence, after which a weird cozy folk tune starts, nice extra…
A nice album form over the big waters, which shows there also nice bands over-there, which cry out they have to be listened to. A lot of bands are not worth the bother but Trolband is! A nice album, nice sound. Never super, but it nice from the beginning to the end.
Does it belong in your collection? It depends on your taste, when you don’t like blackmetal, you have to skip it. Do you like the blackmetal site in this genre, then this is something for you.