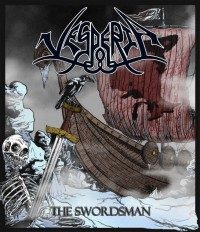 Vesperia, a band which isn’t known by many people, is it? Vesperia is the new name for the Canadian band we knew by the name of Bolero. They released an album last year which pleased me very much. There were some issues where it could be improved, but overall it was a nice idea. The change of name goes with a change of direction the band made. In the past it was not always obvious what they really wanted with their music. They made a decision, it’s definitively going to be folk-metal.
When you listen to the EP your thoughts don’t go to Bolero immediately, this is something different. It became more merry, in the trollmetal way.
The music is quite like Svartby does it.
The first track, the title-track, ‘The Swordsman’. It’s a blunt song en very solid, with rough guitars and not a lot of editing after the recordings. The vocals are very low, like the old work of Svartsot and Svartby, something I like personally. The quality of the recordings is not the best there is, but it could have been worse. The rough work is interspersed with clear male vocals. The whole is blunt, heroic, something which can drive a crowd to madness.
The second track, ‘Huntress’, is happy from the moment it starts with a nice keyboard tune underneath the surface. Your thoughts go immediately to Svartby, and from now on, this feeling stays. Maybe it’s not very original, but it’s surely nice for the people who like this kind of music (like me).
‘To Times End we Ride’ is another blunt song, where you can let yourself go loose, it becomes clear the gentlemen have a lot more skills then only blunt stuff, screaming and nice keyboard tunes. The guitarist shows more of his skills and it becomes a little bit more sophisticated.
The last track is ‘A silence prolonging (in longing)’ hasn’t much connection to the rest of the album. The track is acoustic, it reminds of something else, but I can’t get a grip on this. But it’s a nice addition and the Canadians show their diversity.
All in all a nice album, it’s surely points out who they are and where they’re going to. It’s not perfect by far, and it are only four tracks, but I hope they keep creating along this path!
Your CD collection doesn’t become much heavier with this because it’s a free download!