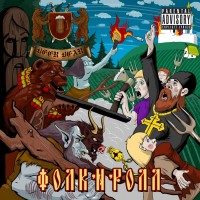 The Russian formation Beer Bear released a very good album in 2010. In 2011 we only get an EP. On this EP Folk’n’Roll of course the track Folk’n’Roll, and this sounds rather…
Folk’n’Roll. On one hand you get typical elements of rock’n’roll, on the other hand the band has messed it up with folkelements. Maybe nice for somewhere on an album but not worthy to name an EP after this.
The rest of this EP is for two covers, with Russian lyrics.
The second track is an Ensiferum cover of ‘Token of Time’, as mentioned sung in Russian. I don’t know any Russian, but I guess they made new lyrics to this song, because I can’t recall anything about bears in the original Ensiferum edition. A nice cover, with a little more space for whistles and other authentic instuments.
The third and last song is ‘Vodka’ of Korpiklaani. A nice one, which adds nothing to the original song. I can imagine this is a big hit in Russia, while it possible to sing-a-long for the Russians too. Nice is the big role for the violin in this track.

I can understand Beer Bear want to give their EP a title of their own, but personally I think Folk’n’Roll is the least track of this album, the covers are nice. It’s not bad EP, but it mainly for the Russian ‘Market’ with the Russian lyrics. International fans will be less impressed because it are mainly covers.