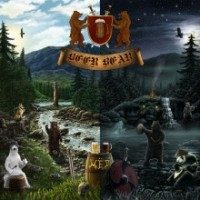 Starting off with a happy metal song with grunts, violins and flutes BEER BEAR’s debut album promises to be a happy addition to the folk metal stable. The second song is even happier and has the typical Russian clean vocals and just when I think it is a bit too much a grunt breaks the happiness. As you can read the word happy has passed by several times now. The concept of the bears is great but in combination with the cheerful flutes and guitar riffs it makes this album perfect for your kids. So if you want your kids to hear some folk metal without the battles, rapes and grim vocals this is the album for you!

Looking at the second part of this album it is actually quite good. There are some nice riffs and great melodies in this album and the diversity in the music is good too. Faster and slower parts, clean vocals and grunts, folk and metal, it is all there. It is great to hear typical Slavic folk music in the music combined with metal.