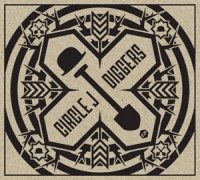 Circle J, the Dutch representatives of folkpunk have released an EP this year. It’s the fourth disc already of these hardworking folkpunkers.
There are a lot of reasons why you should not download Music illegally. A lot of bands on folk-metal.nl put a lot of their own money in releases. Circle J has made a perfect other reason. The cover is simply too beautiful too let pass. The cover is made of hard cardboard with a monochromatic print. The cover can be unfolded twice, creating six pages. Besides the front and backcover, two pages with the lyrics of ‘Diggers’ and ‘Like the Weather’, and one with an interesting IR picture. It’s really a feast for your eyes. You don’t have to read further and you should order it for the cover only, which can be done on the website of Circle J.
But there’s a bonus, there’s also Music on it. Despite the fact I don’t know the previous albums, I listened to some tracks on their myspace, while I was waiting for the EP to arrive, and I was completely ready for a violent piece of work.
‘The Legend of Robert Morgan’ is immediately a nice track, but it probably fits better in a ‘live environment’ .
The second track of this EP is the tittletrack ‘Diggers’, a nice speedy folkpunksong, you can’t sit still with this one and you immediately feel the need to shout along, down, down, down…..
Like we see with their colleagues of Fiddler’s Green, The Real McKenzies and others, there are also some nice and quiet tracks on the album. I’m not a fan of this kind of tracks. They’re like the ballads on heavy metal CDs, but those I like, these songs don’t add anything form me to these albums. I’ll skip ‘Like the Weather’ next time.
Fortunately is ‘La Ronde Des Milloraines’ a nice speedy one. At once you want to hear some more.
The EP ends with the song ‘Sunday Mornings’ an delicious punky track with a nice Irish folk sauce, you can image the tipsy visitors of the local pub roll out the door.

A tasty CD, although the band has some difficulties burning the somewhat rougher ‘live-feeling’ into this silver plate. This causes some pieces in the tracks to feel too sweet. This is something which will undoubtedly not happen when they’re performing live.
Besides this it’s an nice EP with good track. And with the magnificent cover there’s not a real folkpunk fan in the World who should miss out on this one.