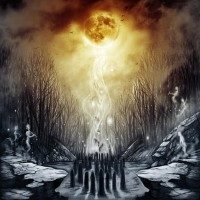 Earlier this year, the French band Fenrir released ‘Echoes of the Wolf’. Cryptic age is in my opinion a band which creates the same kind of music, so you’ll ask yourself, how will ‘Sounds of Infinity’ by Cryptic Age sound.
It starts of with a spoken intro, not bad at all. When it really begins we get the song ‘Maelstrom’, immediately the keyboards disturb you. They’re just too loud and not nice at all. And this is a shame because the song really let’s you feel you’re in a maelstrom.
‘Fortuneteller’ starts of with nice drums and has the same nice violintunes I like with Fenrir, this time they’re keys probably. Sometimes the singing in this song goes just over the edges.
‘Horsemen of the Vale’ is a nice track. Followed by ‘The Aftermath’ which is almost a movie with nice spoken lines, very varied track with nice alternations.
‘Sea Invocation’ is a nice and quiet song, it’s very beautiful and gives us a perfect sample of Jenny’s beautiful voice.
The last part of this album is entitled ‘Sounds of Infinity’ and consist of 4 pieces. It’s a beautiful story in which all kind of Cryptic Age sounds can be heard. And I’m like the wailing sound in it a lot. It gives me shivers down my back.

Cryptic Age has created a very nice and varied album with ‘Sounds of Infinity’. This will be highly appreciated by the fans of progressive folk-metal. The album has a few flaws. Despite the fact Jenny has a very beautiful clean voice, she seeking for the edges too much, and when that happens it’s sounds less. And at some points the keys are too loud. A producer should have noticed and corrected this, which should have lead to at least one point more for this album. With a better production a next album could be a very very good one, so we have to keep watching them, they’re very capable. Compared to the album of Fenrir Cryptic Age earns a good second place.
It’s an album which has to be in the collection of fans of this genre.