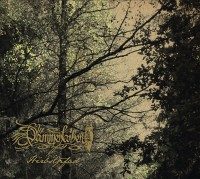 I had two pleasant surprises last wee. The first one was when I got to hear, I could write reviews for Folk-metal.nl. The second one was when ‘Herbstpfad’ Dämmerfarben was blowing out my speakers.
Dämmerfarben plays a mix of lingering, ambient black metal and with folkloristic undertones and melodies. Don’t expect you can sing-a-long, but songs to dream off with. Stroll along a Brown cracking path of leaves in autumn, like you may expect from the title.
The album opens with ‘Höstig’, an acoustic track which takes you along immediately along this ‘Herbstpfad’. The atmosphere is set by an calm plucking guitar, classic strings and even a accordion. A track which could place the band in the same area as bands like Finsterforst or Moonsorrow, if it weren’t for the next track, ‘Im Spätherbst’. In this one Dämmerfarben shows what metal they have in mind for us, and although it isn’t enriching for this genre nor is it catchy, the Germans succeed in setting up their story by creating a slow but massive hypnotising wall of black metal.
With the First two tracks the concept of the album is clear, and they maintain along this concept. Between each metaltrack there’s an acoustic interlude, and despite the fact these are all beautiful tracks, it’s damages the content of the rest of the album somewhat. An album containing seven tracks, of which four are acoustic is in my opinion overkill.
It’s clear Dämmerfarben likes to express themselves in massive slow black metal, but they have taken the critics on their previous release, Abendrot, seriously. This becomes very obvious with ‘Und Winters Kälte Kehret Ein’, a long, fierce track with fast parts which is a perfect ending of the metal section of Herbstpfad, which is only followed by a last spherical acoustic passage.

An excellent record for the fans. From a musical point of view there may not be shocking interesting things on the album, but the overall picture is good and that’s what band like Dämmerfarben are after.