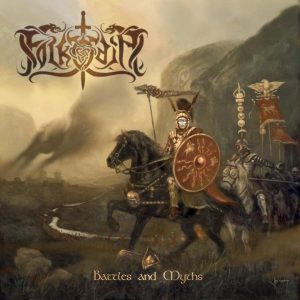 Guitarviolence! Let’s start the review like the CD itself starts. Folkodia is a folk-metalproject with all kind of musicians from all over the world, with ‘Legends and Myths’ they released their 5th album already.

Well, guitar violence, were my last words about this album. But after a few raw guitar strokes it becomes very folky with a huge role for the accordion. And then, this delicious low grunts. And on top of this also clear vocals and a flute. ‘The Arrival’ is the First song of the album, nice folky, perfect creation. I loved it at once!
The second song ‘Word of Kings’ is also nicely balanced. With all kind of folk-instruments and a fabulous alternation between clear Suidakra-like vocals and brute grunting.
Lyrics are about fantasy-themes, dragons, elves and magical weapons. But also about wars in the ancient Roman empire and other historical events. What do they have in common? They’re all brutal, dirty and awesome!
“El Cid the Champion” is a very nice acoustic piece with an enchanting female voice, telling us the story about this hero.
A few songs later we can hear her again in the song ‘The passing of the Elder’ singing with a much rougher voice, with this kind of things, they show they have an awful lot of talent and they understand what is necessary to translate this to terrific music.
At the end of the album there’s also a nice acoustic piece ‘The passing of a Caesar’.
And as a small desert you can find “Sword of the Vandea” which is actually a very complex mix of everything we’ve heard until now.

An album with a lot of metal, plenty of folk, a lot of different voices and different styles of singing and really fabulous lyrics! I think this is a great album, the best I’ve heard of the 2012-releases until now!
A ‘must have’ in every folk-metal collection!