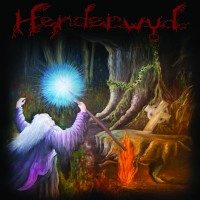 Henderwyd is a Italian folk-metalband which is active for a while as a band, but made the change to pagan folk-metal recently, they changed their name to Henderwyd at the same time. Will their experience bring us something refreshing?
The EP begins with an intro which is a bit moderate, it’s not something which makes you really curious about the rest of this album.
With ‘Valley of no Return’ it all really begins. The song is not bad really bad, although it’s not very original. The ‘scream & growl’ vocals sound nice, but the backing vocals are throughout clumsy. Far beneath the minimum level, not fit to put on an album.
‘Castle Ruins’ has a nice speedy stomping tune and the lead-guitars is kind of nice. You can hear the guitarist is from a different, melodic, metal scene, but there’s nothing wrong with that. It gives the band a nice sound of their own. Listening to the keys, I think the band produced this one itself. The sound doesn’t fit in real good.
But when we arrive at ‘Curse of the Bard’, the guys think they should promote the clean backing vocals to lead vocals, this gives me the feeling I’m cursed by this bard. It sounds terrible, you can’t put this on an album. After this the track isn’t so bad.
‘Land of Eria’ has a nice beginning, the keys sound a lot better and the backing vocals hold themselves back to the real background. It’s the nicest track of the album, because there isn’t much wrong about it. And also the next track ‘Rise of the Storm’ sounds pretty decent.
In the track ‘Voice of the River’ the ‘clean vocals’ are placed in battle-position again and this is something which the band really shouldn’t do. Again the song is ruined by this.

In short an EP which is much too long. ‘Curse of the Bard’ and ‘Voice of the River’ but also ‘Valley of no Return’ should have never been put on an album this way. I can imagine what’s the idea behind using the clean vocals, but the band should find someone else for this job. I’ll never want to hear these songs in this version ever again. Henderwyd should have worked with a better producer of should have more self-reflection. Although it’s never original and refreshing, they completely ruin their own song by clumsy clean vocals, and this while they have a nice vocalist for the rougher parts. It’s getting more and more difficult to be original in this crowded folk-metalworld. Henderwyd could be a nice ‘local’ band, but there’s a lot of work to be done.