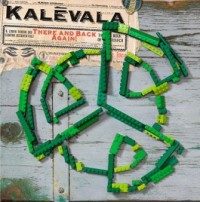 The Italian band Kalevala has a varied repertoire, I wondered earlier if there’s an audience who likes this all. But the band exist for quite a few years now and has an huge discography and a long list of gigs, so it doesn’t seem to be a problem at all.
The album ‘There and back again’ starts of with a spoken intro, followed by a medieval sonnet by Cecco Angiolieri on a melody of the Italian chanson-singer “Fabrizio De Andrè”. Doesn’t really appeal when you read this, but it’s quite a nice song.
‘Folk Metal, Baby!’ is a song which we would not give the label folk-metal, but it could easily fit in the repertoire of Fiddler’s Green, and is really very nice.
The same goes for part of ‘Full Frontal Nudity’, but this songs has also other elements, but again a nice song.
‘Come Dio Comanda’ is a folk-rock song with nice Mediterranean accordion-tunes.
In a song as ‘Dinamite’ the Jethro Tull influences come to the surface, the use of the flute is very contagious, fans of this old band who like folk too, will love it.
‘Waterloo’ is not really a song for me, but the flutes in this track will trigger you for sure, I will play this one again only for the whistles.
All in all a nice album and a nice band for listeners with a broad taste. When you like Fiddler’s Green and an old band as Jethro Tull, you surely goint to like this CD. The first time the music sounded kind of weird, it’s a strange mix, but it has a nice flavor when you’re used to it. The combination with French chansons is a little less my taste, but when you put in some effort and listen to it a few times, you have to admit it works.
I’ve already started to dig up my old Jethro Tull Lp’s, because when I think of it, it was very nice music.
Kalevala, a big applause for this unique mix.