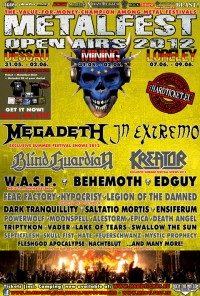 Besides the traveling series of concerts like Paganfest and Heidenfest, Rock the Nation is working on their own touring festival called ‘Metalfest’. Biggest concern of this was that there weren’t any plans for this festival to come near Holland. This changed with the coming of Metalfest Loreley, which is just a 2 hour drive from the Dutch border. A beautiful location (an amphitheatre, up in the mountains besides the Rhine), amazing weather and a great line-up with an even better sound were promising for a great festival.

Like the name implies, there were a lot of metalbands on the festival, in a lot of sub-genres. The Folk-metal and Folk-rock was well presented. Below the full report of the festival.

Saltatio Mortis
Unfortunately, Alestorm already finished when we entered the festival at Thursday evening. Saltatio Mortis was therefore the first band which falls within our genre. Luckily for us, this band isn’t the smallest in the scene. Saltatio played really good, entertaining the public easily. Vocalist Alea was, again, really charming and caused the audience to sing, clap and jump arm in arm. While the setlist wasn’t that surprising, it stayed a great performance. But how couldn’t it be great, with hits like ‘Prometheus’ and ‘Spielmannsschwur’, played between songs from the newer albums like ‘Eulenspiegel’. The band seemed really enthusiastic, and more than eager to get the public to move. A more than descent performance, at which this band shows that they belong to the top of the German Folk-rockscene.
Score 10/10

Eluveitie
Also on Metalfest were the Swiss from Eluveitie. The location was ideal for the music of this band; a large stone podium, surrounded by a large tribune in the shape of an amphitheatre. In this setting, with a flawless sound, Eluveitie played a really solid set. Though there was one small downside that can be recalled from this performance, and that was that the whole setlist was devoted to the latest album ‘Helvetios’. Almost all of the songs were from this album. Nonetheless a beautiful performance on the most suitable location possible.
Score 10/10

Feurschwanz
Almost directly after Eluveitie the time was come for another big German band; Feuerschwanz. The tent in which the Germans played was way too small, there wasn’t enough space for the audience which gathered en masse to see the comical folk-rock. The public seemingly enjoyed themselves, but because it was really crowded I couldn’t see much of the concert. Too bad, because I’ve always wanted to properly see this band live.
Score 6/10

Asenblut
The fact that Metalfest offers a chance to smaller bands became clear with Asenblut. A small German band, that, as they say it, make ‘Pagan black metal’. However, some thrash-influences could be heard through the music. Generally speaking, this band was a case of doubt. Their stage performance was more than descent, and they’re all musically skilled. However, the music couldn’t convince me; it wasn’t really original or special. A typical ‘So so’ band.
Score 6/10

Ensiferum
Ensiferum always know to put up a decent show. But how couldn’t it be, when you start the show with ‘Twilight Tavern’, and follow up by all excellent live-songs? Unfortunately, the sound wasn’t that perfect, which resulted in weak-sounding guitars. Also, the band slipped sometimes, not playing that precise as we’re used from them. Nontheless, Ensiferum played an amazing live-show, in which the public reacted enthusiastic to the band. Besides all the hits Ensiferum played in a short time, the band also had some surprise left. Like everybody should know, Ensiferum releases a new album the 27th of August. Ensiferum played one song of this album, called ‘Burning Leaves’. I can be short about it, this longs for more! A relatively long song, with all the typical Ensiferum-elements implemented; even the Finnish choirsinging known from ‘Lai Lai Hei’ returned. Ensiferum played like we’re used from them; good, diverse and enthusiastic.
Score 8/10

Heidevolk
The Netherlands were well presented on the German metalfestival. Besides Epica and Legion of the Damned, it was the duty of Heidevolk to defend the Dutch Glory. And they did this perfectly! Sadly, Reamon (guitar) and Joris (vocals) couldn’t be present at the festivals, so they had to play with two substitutes. What amazes me immediately, was the great mass of Germans who liked the music of Heidevolk. Everybody jumped, partied and, with a heavily German accent, attempted to sing the Dutch lyrics. The band itself was a real pleasure to watch; enthusiastic, jumping around and in perfect shape; magnificent to watch!
Score 10/10

In Extremo
In Extremo could only be disappointing after such an amazing show of Heidevolk. While the show was descent, and with a spectacular fire show, the whole show couldn’t convince. The band played like they didn’t want to, and played like they were on the autopilot. The songs that were played were mainly uptempo, though halfway the set a few slower songs were played right after each other. In general a nice performance of In Extremo, though I’ve saw them playing way better than tonight.
Score 6/10