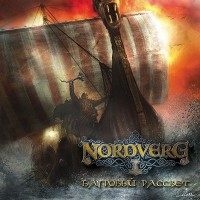 The Russian band Dragon Tears re-invented theirselves, changed their name into Nordverg and released a debutalbum entitled ‘Crimson Dawn’.
The album starts of with an intro which isn’t really a strong one, I’ve heard them much better. It’s a kind of a prelude, showing a glimpse of the rest of the album.
With ‘Bagrovij Rassvet’ the band makes clear where they aiming at. Serious folk-metal with an obvious Slavic input. The vocals are in Russian and the band has great vocalists, the choirs are ok, but the leadvocals are very good. The lead singer has a raw ‘warrior’ voice. No metalscreams, but cleane vocals, but what’s clean when you voice is this raw?
When we got to ‘Berserk’ the album really hits off. From there we get al kind of nice songs. Uptempo like ‘Berserk’, ballads like ‘The Cold Chain’, drinkings songs like ‘Invitation to the Tavern’ and the Slavic partysong ‘The Old Tavern’.
And the fantastic ballad ‘Volkodav’ which has the feel of ‘Heart’ of the also Russian band Rarog. You just want to grab your neighbours shoulder, hold your drinking horn high and scream it along, if only my Russian wasn’t so poor, although… when the pint is already empty….
And as a last encore a song with fine bagpipessounds and tasty guitarriffs.

In short a strong album of the men of Nordverg, it will be noticed, this may be a debutalbum, but the the members are of Nordverg aren’t debutants. After a somewhat slow start the album gets a lot better after a few songs and it fits perfectly in every folk-metalcollection. But songs like ‘Mech Sudby’ and surely the fantastic ballad ‘Volkodav’ make this album better then the average one.
For the fans of Slavic folk-metal this album is a ‘must-have’. Very nice work!