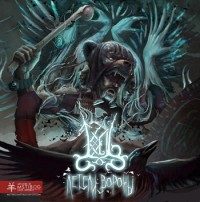 With the motto ‘Why should you be allways cheerful … ‘ the bassist and singer of Russian humppa band Bear Bear started a side project. Bear Bear, the name says it all, is a party folk-metal band which lets cheerful bears live adventures on a beer sound.
To find a counterbalance Top is created. Top tries to bring the grim atmosphere of the harsh northern Russia to call. Grim spruce, ice storms, swamps and shamans who attempt the gods to a friend. And that’s something completely different than gay bears, so much will be clear.

We begin this grim journey in the ancient forests, which will also be immediately clear, though they are a bit crowded with birds. The intro is very different than we are accustomed. We are obviously in a forest where a Shaman supported with a didgeridoo spells his incantations.
The second track shows is clearly about wolves, the wolves howl you immediately. The screaming metal vocals do justice to the stark nature of this song. Just when it starts to be a bit boring, beautiful alternations are made, making this long track still remain attractive.
Top has made his point, characteristic of the regular melting lines of guitar and vocals. The heavy Russian choirs are doing very well as a change from the sometimes monotonous screeching vocals. With ‘Ravens flew’ Top proves that the summit can be different, because this song has a very nice quiet start. The song has a beautiful violin playing through the background noise of singing and choir, very nice original number.
‘Marazula’ also starts quietly, but although this number is gradually becoming rougher on this album it remains a quiet song. But it is the also instrumental “Vodokres’ where Top shows it doesn’t ray all the time.

All in all a very nice album for fans of the rougher work. The weak point of the album is it’s me sometimes a bit too much alike. Vocal lines often go along with guitar lines for example. Also, the lead vocals are quite often the same. Furthermore, the album is full of good ideas. Top succeeds pretty well to give me the idea I just travelled through a grim harsh landscape.