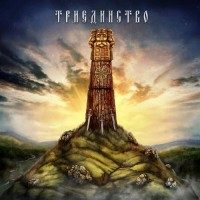 ‘Triunity’ is a conceptual split album of three bands, the Ukraine band Chur, Piarevaracien from Belarus and Oprich from Russia, released in a limited hand-numbered edition.
With this project they want to express their historical kinship and cultural roots and at the same time underline the unique heritage of each of these countries. Usually a split album is just an album on which 2 bands divide the space and time to keep the costs low. Triunity is something completely different. Triunity is not just the title of this album, but also the name of the project in which these tree band cooperate. This album is carefully forged to a whole. And this can be heard when you’re listening to it. The album forms a whole although the changes in sound during the album. It show good taste to put the band after each other and not mix them. Each band plays three tracks which gives it a restful touch.
The journey starts in Russia, which is inhabited by proud, fierce and daring people who worship the sun. Oprich pictures the river Wolga, and the boundless people. This is done with a nice full metalsound.
When we have come to Belarus it has became autumn and you can feel the first Indian summer days when Piarevaracien takes it’s part of the story. The flutes used by the band are slightly melancholic which gives it a delicious sound.
And after this we get to the Ukraine where Chur describes the mountains, rivers, woods and endless fields of these beautiful country.

The album is put together thoroughly and is well thought through. Despite the fact this are three different band, the songs fit together perfectly and make the album a whole. It’s a pity the first six tracks are a little bit muted. The tracks of Chur sound a bit brighter. But the fact remains it’s a wonderful project. Again a ‘must-have’ for the fans of this genre.