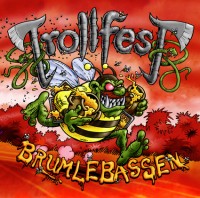 As you can read in many reviews and interviews, Trollfest was a joke at first, and they’re very serious about their not being serious. I don’t think this is a good description. Trollfest has fun, the music they make is serious on the other hand and is perfectly created. Of course all is spiced with humour.
The new album ‘Brumlebassen’, wich will be released in august 2012, has of course a cartoon on the front-cover. It is Illsint that has his own song on the album.
The album starts off with the title track and seems to have a soft and smooth intro, but this turns into real trollmetal soon, it’s the longest track of the album. ‘Böse Tivoli’ begins with a barrel organ and is also a smashing track.
The melodies are very contagious and the melodic parts are nicely alternating with the hard ones. The third track on the album has a Spanish atmosphere and is somewhat more catchy but we can get some rest with ‘Hevlette’. This is a little sing-a-long accompanied with an accordion.
After this there’s a track with has a more usual build up. The track is somewhat less chaotic and is almost a standard metaltrack. After a nice song accompanied on acoustic guitar we go on with ‘Apis Millifera
And ‘Trinken Troll’. The last one is very varied and goeds from metalriff to chaos to jazz, easy listening to sing-a-long.
It’s clear I like diversity. Trollfest matches perfectly with this. Folk-metal, Balkan sound, Latino influences, harsh guitar riffs, screams, clean vocals, fast, slow, bells, whistles… everything is in it perfectly combined!
he most ‘hip’ track on the album is ‘Sellout’ in which female vocals are heard which makes this song almost a song with ‘hit’possibilities’.

My favourite track however is at the end of the album and is called ‘Rundt bålet’. Some nice trolls at a camp-fire, busy drinking. Suddenly a nice accordion-tune is heard and you’re picture yourself in Austria. Then the metal smashes in and the nice thing is the accordion-tune keeps going on in the background.
I can be short about it, I think it’s a terrific album. Anybody who hasn’t seen them live yet, be sure you’re at Heidenfest 2012.