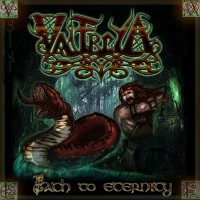 Folk-metal from Canada, something you don’t see that often. Valfreya comes from this faraway land, and try to entertain us with their first full-length called ‘Path to Eternity’. While this band is (as they say) quite popular, I’d never heard of them. Therefore, it was time to look through the supplied info. This looked promising, and it showed the band existed since 2009. Nonetheless, they’re working hard to play as much shows as possible. Furthermore, I read in this info a lot of positive reviews to ‘Path to Eternity’, it gave me the hope that I had to deal with an awesome album.
And damn, what a disappointment, when I finally heard the music! Valfreya starts, just like a lot of other folk-metalbands, with a spoken intro that gradually builds up to the first track ‘Deity’s Grace’. This song is typical for the rest of the album; fairly high tempo, standard folk-metalmelodies and the weak vocals of vocalist ‘Crook’.
This is the weakest aspect of the album; the vocals. Grunts are interchanged by classical vocals, but both sound a bit off. The grunts aren’t brutal enough, and the classic singing sounds too fragile and not at all convincing.
The whole album is filled with songs which sounds OK, but not original at all. The production is dull, the keyboards sound cheap and the vocals are sometimes annoying.
While the band sends us reviews which state that they’re the ‘Canadian answer to Arkona’, I can’t believe this. The debut-record of Valfreya will probably only be popular in Canada.