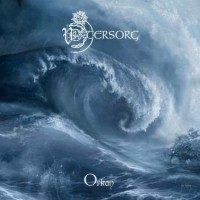 Andreas Hendlund is a very busy man. Besides a lot of side-projects he releases another Vintersorg album this year. This album is entitled ‘Orkan’, and an Orkan it is. It overwhelms you like a storm, right from the beginning.
The first song, Istid, doesn’t have a nice and quiet build up intro. It hits off immediately with guitars, fast drums and screams. There a little moment to rest halfway, which feels very comforting after such a start.
In 2011 Jordpuls was released, four years after Solens Rötter, en this year Vintersorg releases Orkan. Fortunately this high speed, concerning all his side-projects, had no bad effect on the quality of this album. Vintersorg has made some experimental trips on previous albums, but this one is an album like we’re used to by Vintersorg. The riffs and clear vocals, although mixed with some screams, make it nicely varied. Pure clean vocals would have made it a little bit dull at the end, but this is surely not the case with Orkan.
Polarnatten has an interesting intro, the tune which is started with the keys is continued by the guitars and screams are laid over it.
The tracks are all quite long, but due to the varied songs and the small moments of rest within the songs, you don’t notice this really.
Myren also starts with a extraordinary intro, but it has got some more time to build up. I would have put these two tracks after each other, but would have put another track with another intro in between. But otherwise there’s nothing wrong with the track and it has a beautiful intermezzo.
It’s a pity I don’t have the lyrics, but looking at the titles the theme’s are the same as they were on the previous albums. Fantasy, winter, mythology and the double interpretation of the meaning of storms.
Orkan is justly the title-track of the album. Guitar-riffs which are a pleasure to your ears and a very nice vocal line.
Havets nad, brings on an ocean atmosphere. Rough waters, fierce wind, fitting nicely to the title. It has violin-parts between the bemused guitar-parts. It rages like a storm and ends in calmer waters.
The album closes with Urvedersfangen. A special track in which vocals are running through each other and the guitar is doing nothing very special. There’s an interesting violin-part in it, causing the track and thus the album to end quietly. All in all a nice song, but no catchy closure.
Vintersorg shows he’s capable of transferring the ice-cold, Scandinavian atmosphere. It’s like you’re standing in a snowy landscape, but without causing the album to feel cold. It’s a nice compete and solid album.
And despite the fact I might be contradicting my praising review, there’s something missing. Orkan is a fabulous album, but I’m missing a small bonus.