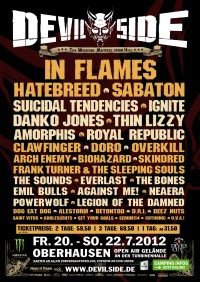 Folk-Metal.nl joins the Devilside festival in Oberhausen, Germany. This festival will last three days.
We’re only visiting the Saturday and we have a nice day ahead of us. It starts quite early and we enter when the third band is playing at 11.30.

Devilside festival is well organized en has two stages next to each other, many beerstands, all kind of foodstands and a metalmarket. You can choose what you want and there’s a lot of space, because there doesn’t seem to be a lot of people, this turns out to be due to the huge area.

It’s time for the first folk-related band, Mr. Irish Bastard. The band sounds a bit goody-goody, but they build up a nice atmosphere. There’s a lot of dancing and singing going on. The band is enthusiastic and it looks like they’re having fun.

When they stop, another band starts on the podium next to this one and the audience moves on a little. But soon it gets more crowded before the Hellstage, because Alestorm is building up. It sucks a little for the band on the Devilstage, because there are more people looking at the soundcheck of Alestorm then there are at the playing band.

Alestorm hits off nice at once with an techno Alestorm intro and immediately the party starts. If you like the music or not, you can’t stand still at Alestorm. This causes huge dustclouds in front of the stage. The band has so much fun on the stage it’s just nice to look at them. Of course all ‘hits’ are passing by which causes happy faces and a nice pit.

And while a great variety of bands play at the stages the visitor can have a nice drink at one of the many bars, for instance a litre beer! For anyone who’s feeling hungry, there’s a large variety of food and also vegetarians can have a nice bite.

About 18.30 it’s time for Amorphis. In my experience they blow the roof of every smaller venue. At the first songs the vocals can’t be heard very well, but after a few songs this gets better. It seems the German audience is not coming for this band, because the crowd doesn’t get very excited. But the band is solid as a rock and is playing new and old songs.

The weather was great this day, and despite the fact we can complain about the dust, dirt would have been worse.

Devilside is an nice festival, the variety of bands was just a bit too big in my opinion. But when you want to see a couple of bands you get a few of them for free, some you wouldn’t see otherwise.