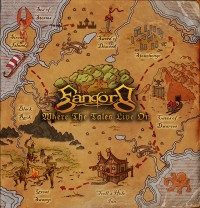 Despite the fact FängörN is still searching for a label they decided to release a follow up for the debut album ‘Mysterious Land’. The band evolved from the heavy metal scene and the previous album had a huge heavy metal stamp and was lacking some folk. You immediately wonder if this band, which claims to be a folk-metal band has moved towards the folk-metal or not.
This second album is entitled ‘Where the Tales Live on’ and starts of in an almost traditional way in the folk-metalworld with an, instrumental, intro. When this is finished the bands hits off immediately with an solid track ‘Miles away form Home’, but this song evolves as it is going on and when the trolls get really far from home they’re a little overwhelmed with despair and the track becomes a bit mellow. And just as I did with the previous album I have the urge to look up where the bands from. But no, they’re still not an American of Canadian band, but the music is quite similar to the North-American style and the lyrics are also in neat English. Another thing which is noticed at once is the development of the ‘heavy metal’ voice.
‘Stormbringer’ is an nice solid track, which has Finnish folk-elements besides the symphonic elements. I’s a little bit in the style of bands like Ensiferum and Turisas, without sounding like them. And indeed when I’m looking at the album information it turns out to be mixed in Finland, and this can be heard at once.
The journey through the land where tales live on continues and when the storm has driven them to Sirens’ Island it’s time for some Russian singing. And despite the fact, the track is called ‘The Road to Stonehenge’ the company on it is Russian. And they travel merry it seems, the happiness is dripping out of the loudspeakers and the accordion-like keys give the song this nice ‘trolly’-sound.
‘Swamp Feast’ is a dark and grim song, where the troll-element has again a prominent part.
After an instrumental intermezzo we get the title-track of this album and then the trolls seemed to have found their destiny. And a song with tavern in the song-title can only be a happy one, when when it also has troll in it, you can almost imagine the sound of it. The story is nicely wrapped up with the ‘Last Way’. The buyer of this album also gets a small encore with the track ‘Крепкое Пиво Троллей’, a live version of the track from the first album.

FängörN has clearly grown since the previous album. We often hear second albums which are a poor reflection of the first one, but this isn’t the case with these Russians. The band has clearly grown. The vocals and compositions have evolved clearly. In wouldn’t mind when they would be singing in Russian, in that way it won’t sound as North-American as it does now. But the Finnish mixing has also an positive influence on their sound. The band knows how to tell a story.
Also positive is the fact they sound more folk-metal than on the previous album.
But I think listen for yourself, because you can listen to their album streaming on their website.