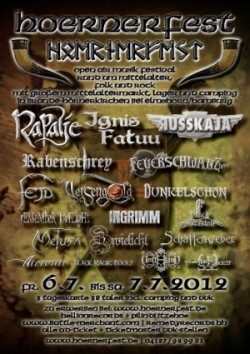 This year Folk-metal.nl traveled back to the ‘well known’ Brande-Hörnerkirchen for one of the nicest festivals of the year. Hörnerfest is a small festival in northern Germany, with just 2000 visitors. The festival is mainly about all styles of folk and folk-metal, so perfect for us! With the festival in one’s backyard, meat for reasonable prices, and a shishatent it promised to be a nice weekend. Below the report of all the bands we’ve seen during this weekend.

Thorondir
Last year canceled, this year back for the rematch; Thorondir. Unfortunately, it couldn’t bother most of the people that were awake early enough to catch this show. Okay, some hands were raised in the air, and here and there a casual headbanger, but this seemed more a courtesy than out of genuine enthusiasm. Perhaps it was too early for this rougher folk metal? While the gig itself was solid, it did not really convince. Maybe a place later in the day would have yielded more response.
Score: 6/10 (Nick)

Black Magic Fools
Following a substandard performance of Thorondir it was the turn of an (for us) unknown band to take the stage, the Black Magic Fools from Sweden. A bunch of strange guys dressed in black with several folk instruments entered the stage. It was a big turnaround after the violence of Thorondir because these guys don’t care about stereotypes . Folkrock which is so great in Germany, could simply be made in Sweden! The singer was a very sympathetic figure who made sure the crowd had a great time.
Score: 7/10 (Colin)

Northland
Not only was there enough to see for the lovers of German folk, the folk-metal fans were served just as well at Hörnerfest. Northland makes the Spanish Folk-metal that appears to be inspired by Scandinavian bands. However, they involve influences from their own Basque Country into their music. They made sure the performance was convincing, something that can’t be said about any band from southern Europe. A convincing performance by these Spanish lads.
Score: 8/10 (Nick en Colin)

Rabenschrey
Rabenschrey is typical German folk in the style of In Extremo and Subway to Sally. That the Germans could appreciate this, was shown by the big turnout in front of the stage. Band and audience put together a nice party, but the party really broke loosewhen’Hey, wir sind heiden!’ was played, based on tune of Pippi Longstocking. This, along with a wall of death that occurred without background music, shows that Rabenschrey does not take itself too seriously, but can put down a seriously good show. Nice!
Score: 7/10 (Nick)Score: 7/10 (Nick)

Rapalje
Rapalje was during Hörnerfest the only Dutch band that took stage. This was no problem for the German public that went completely crazy during this gig. It took a while for the spark to jump over between audience and band, but once it happened was a complete madhouse. People danced and jumped on the merry folk sounds of this Dutch quartet. The band itself seemed to havefun, and played a great set full of classics such as ‘Wat zullen we drinken’. One of the better performances on this festival!
Score: 9/10 (Nick)

Feuerschwanz
Typical German folk, but with humorous texts? That could only be Feuerschwanz! This German band played a great show at Hörnerfest, with all their best known songs being played. Songs like ‘Wunsch ist Wunsch’, ‘Metvernichter’ and ‘Am Feuer’, as well as numerous other classics were played this night. The band knew how to entertain the audience with ease, for example with the ‘Miezen’, who were, dressed as cats, holding large signs showing the lyrics. At ‘Metmaschine’A real machine was driven on stage, generously providing mead to the front rows.

Yet not everything was perfect at this show of the Germans. Often the show looked like it was forced a bit, as well as it looked routinely. A small damper on an otherwise excellent performance.
Score: 7/10 (Nick)

Aletrun
Aletrun was the band that kicked off on Saturday. With the hangover of the previous day still fresh in memory, there was no worse beginning imaginable than this band. At times it sounded good, but often sounded messy and misguided. That they also had a female vocalist who was clattering through the music made this attempt to standard folk-metal not better. There would have been better ways to start the day.
Score: 4/10 (Nick)

Ingrimm
On a German folk festival you have of course folk rock, folk rock and yes even some extra folk rock. Time for Ingrimm, a decent show, a good atmosphere and nice music. Yet it never REALLY stood out, which is a shame, because with this kind of music it could still be very good. Nevertheless, the audience was very enthusiastic!
Score: 6/10 (Colin)

Fejd
Goosebumps, which is in short what can be said about the Swedish Fejd. With a perfect sound these Swedes performed an almost magical show. Midtempo folk, made with traditional instruments and completed with the beautiful vocals of Patrik Fors Rimmer. Although this is one of the few bands where there was no real partying possible, the public enjoyed themselves visibly. At times I too have stood with goose bumps, so beautiful was the music of Fejd. Especially songs like ‘Eld’ and ‘Storm’ were well received, but also the new song from the upcoming CD, which was just like we know Fejd. A magical appearance of these Swedes, so certainly go and see them if you have the chance!Score: 9/10 (Nick / Colin)

Black Messiah
In Germany they also make folk metal and German Pagan Metal, and it sounds fairly similar, Black Messiah is a little exception. Yet Black Messiah some nice CDs with their violin and it sounds like there Slightly different. In the first numbers came the violin very poorly in the mix, slowly, this was better but never really catchy. The singing did not bother me much and asked little for stage presentation. The Germans loved it, especially because the Germans are also I think. I myself have now gone away, it was not really strong.
Score: 6/10 (Colin)

Ignis Fatuu
I don’t want to spend more words on Ignis Fatuu, besides that it was really, really bad. Although I usually like the music, and they often have an entertaining live performance, they just couldn’t convince today. Musicianship was downright sloppy, instruments were often not in the right tune, the setlist was filled with mid-tempo songs and was downright boring. No, quickly forget this show!
Score: 4/10 (Nick)

Versengold
Unfortunately we haven’t seen much of Versengold. What we saw immediately convinced, however. Nice acoustic folk, that was brought passionate and enthusiastic. These things, along with a great sound and an active public led to the wish that we could see the whole performance.
Score: 8/10 (Nick)

Russkaja
With Russkaja Hörnerfest promised to close in a good way. The only question was whether the Russian ska would appeal to all the folk-metalheads. The answer is a resounding “YES!”. From the first notes played by this company there was a pleasant pit in front, which already reached a climax during the second song. The second number in the set was ‘Psycho Traktor’, a song at which Russkaja always demands a circlepit performed by the public. The people responded immediately to this request, resulting in a rather large circlepit for such a small festival.
Russkaja itself provided a good show, especially due to frontman Georgij, who turned out to be a real charmer. Therefore, it was a very succesfull move of Hörnerfest to book this party band as a headliner for their festival, since after all this was one of the best gigs of the festival!

In short, it can be said that this was a successful edition of Hörnerfest. A varied line-up, a perfect atmosphere and the small, cozy scale of the festival already got me looking forward to next year’s edition.