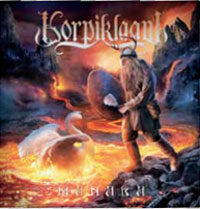 The Finnish band Korpiklaani releases their eighth studio-album this year. A murderous pace, which is not becoming them well. After some disappointing performances, the albums begin to deteriorate. Korpiklaani turns over a new leaf with Manala.
The first track ‘Kunnia’ doesn’t start with an intro, but hits of with a popular hé hé hé at once. The song sticks, but it sounds a bit popular.
The second track is not very special, but with ‘Rauta’ they are completely on the wrong track. It’s a boring song, the good thing is, it isn’t very long.
‘Ruumiinmulta’ has an intro which brings bach the old revelry we’re used to. In contradiction to the previous work, Korpiklaani wasn’t inspired by the local liquer store this time but with the Finnish Kalevala. This is their national epos of stores from the Finnish mythology. I regretted in the past Korpiklaani didn’t went on on the path of Shaman with traditional yoiks en Shamish lyrics combined with metal. When I read of the ideas of Manala (realm of the dead in Finnish mythology), I slightly hoped they would return to this. But regrettably…
Korpiklaani has always kept a high rate of releasing albums. With the previous albums this went a little bit at the expense of the quality. It became like a machine.
Every band evolves and it’s understandable you’re up to something else after three party albums. Take your time to evolve and don’t try to adopt another image overnight.
After another unmemorable track there’s a surprising intermezzo.’Sykka’ is a quiet song and although clean vocals would have fitter nice to a traditional sounding song like this, it’s acceptable.
Ievan Polkka has rapid vocals but the rest of the song is like they’re fooling around a bit. More or less the whole album sounds like this.
A nice renewal is the new violin-player. There was nothing wrong with Jaakko but Tuonas seems to know better how to get the violin to the foreground without being irritating.
Another nice thing is they sing in Finnish. English didn’t suit them well in my opinion.
A great disadvantage is the lack of variation in the vocals (with a lot of ‘just-not-grunts) and the architecture of the album.
‘Husky sledge’ starts of with a kind of violin-jam. Then some sleigh-bells enter, which gives it a funny touch. With this track I have to recall a little on my remark about the variation. But it’s not a bad thing this track isn’t too long either.
The next ‘Dolorous’ also sounds a bit different. It’s obvious the second part of the album is a lot more interesting then the First part. The instrumental songs are really an improvement.
‘Uni’ is unfortunately sounding a lot less regarding to vocal and guitars.
‘Metsalle’ starts promising and I would have liked to write it’s a worthy capstone of this album, but unfortunately Korpiklaani doesn’t know to stop at the right moment.
Despite the fact there are some nice moments on this album it’s a huge disappointment and it makes me curious with what the band will come up the next time.