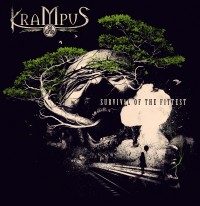 Intriguing artwork. The fact that they are present at Heidenfest. They already got my attention with this, but it continued. Reading the accompanied biography of the band, Krampus states that humanity needs to be awakened. That values like Honor, Pride, Freedom and Unity should return in this society. This band which consists of 8 members doesn’t look to the past like fellow folk-metalbands, this band looks to the future.
At least, that is what Krampus wants to make clear on this debut record ‘Survival of the Fittest’. Musically speaking, there’s certainly a modern touch to the more or less traditional folk-metal sound of Krampus. They’ve used vocal parts and guitar riffs which have a close resemblance to the nu-metalscene. Especially the clean vocals are close to the style of what is now popular in the core-scene. Don’t be afraid though, they’ve used it sporadically.

For what dominates still is the traditional folk-metal combined with melodic-death, in a style that is alike of that of Eluveitie. This is clear when the first real song of the album, ‘Beast Within’ starts, a fast, powerful song on which you tend to strongly suppress headbanging. A deep grunt, interspersed with beautiful flute pieces, on a background of heavy drums and guitars, it certainly tastes like more!
And that’s exactly what we get. Throughout the album, the pace is very high, interchanged with a very few points of rest. ‘The Bride’, for example, is a nice counterpart to all the violence. Due to the melancholic touch, this song sounds a bit similar to the typical sound of Amorphis.

Where last year we had Skálmöld as the best newcomer, this year it’s definitely Krampus. Catchy, fresh, but musically with a traditional edge. Good solid folk-metal with a new look. The only downside that can be named are the clean vocals. Although this is not bad, it certainly sounds less than the rest of this album. This band certainly has potential, so they definitely go see them on the upcoming Heidenfest!