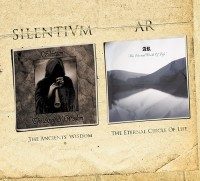 Silentium – The Ancient`s Wisdom
Fromt the very first track it’s obvious; Silentium – The Ancient’s Wisdom is as underground as you can imagine. A large collection of ambient soundscapes, no more than that. This is obviously a debutalbum wheThe compositions as well as the production leave not much of a impression. It’s obvious the sounds are generated by a standard syntheziser, Silentium hasn’t done much to give it some depth. The Ancient’s wisdom would be a useful soundtrack for a videogame, but that’s the only thing you can do with it, even the metalfan. Maybe when it was released during the start of the new-wave period, it could have had a chance, but that is years ago.
A record which should have had more attention in composition and production. This re-release is only nice as a collectors item for the fans of Munruthel or Slavonian Pagan Metal in general.

The content of AR on this split album is not reviewed because it is out of our range of music.